A Forever Home for Penny 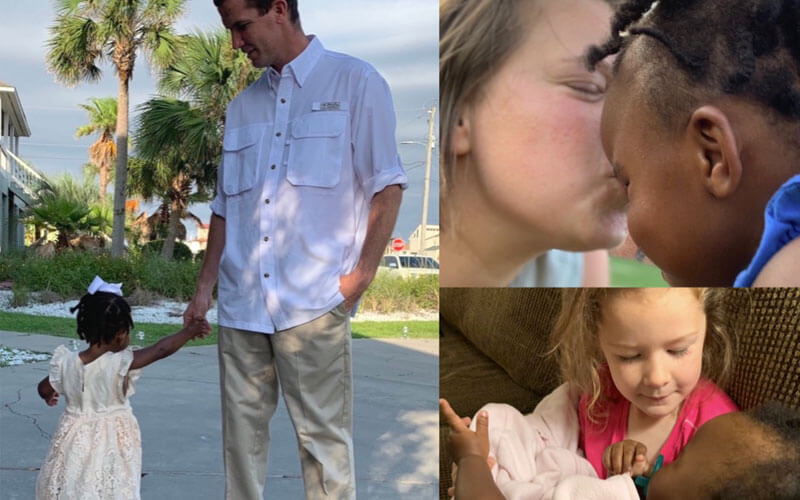 Jay and Jessica Grisham always knew they wanted to have a big family. The couple decided early in their marriage that adoption would be a part of their parenting journey. It was a cause near and dear to both of their hearts. However, the process wasn’t as easy as they thought it would be.

After months of waiting and constant disappointment, the couple made a choice to put the adoption process on hold and start having biological children. Jessica gave birth to four children; two boys and two girls. A few years after their fourth child was born, they decided to pursue their dream of adoption.

As they pursued adoption once more, they began to realize the need for foster parents. Jessica says, “We just started realizing that these kids need someone who will love them unconditionally and be like parents to them. They need someone who can be understanding, and we knew we could extend that.”

In the summer of 2017, The couple received a call about fostering a baby girl in the neonatal intensive care unit (NICU). Baby Penny was born prematurely (at 29 weeks) and needed a place to call home.

“We were excited to meet this new little person but it was sad to know that a mother was not going home from the hospital with her baby. We did get to meet Penny’s mother, and I was very thankful for that. We fell in love with her immediately, but there was still a certain level of sadness in the situation,” says Jessica.

Nervous but excited, the couple accepted the offer and brought Penny home. They were only supposed to foster Penny for a few months, but a few months quickly turned into two years. Jay and Jessica say the last two years have been filled with bliss, but Penny still faces a number of physical challenges.

She was recently diagnosed with hydrocephalus, a condition which causes fluid to build up in cavities deep within the brain. Jay and Jessica say the recovery process is full of ups and downs but they’re thankful to have a great support system through their church and through MCH.

Jessica says, “If you’re going to do this thing, make sure you have a good support system around you. Methodist Children’s Homes really does have an advantage. We have a whole organization that has our backs and they are in our corner with us, helping. We don’t feel alone.”

By simply looking at Penny, you would not be able to tell just how much she has gone through. She is constantly laughing, singing, running and learning the world around her. She has become the silly yet sassy, seventh member of the Grisham household.

Jay and Jessica have maintained a relationship with Penny’s mother throughout the years. They speak with her frequently and have pictures of her alongside Penny’s crib. For them, reunification was always a priority for Penny. But in foster care, there are plenty of twists and turns. The NICU baby who was supposed to return to her biological mother by Christmas of 2017, is now on the path to being adopted by Christmas of 2019.

Jay says about Penny, “I want to be gracious to her. I want to extend the same grace that was given to me through Christ. I want her to experience love that she may never understand.”

Every child is different and every foster family has a different story. When giving advice to anyone that may be interested in fostering a child, Jessica says, “If your goal is to build your family with people, then don’t do foster care. But if your goal is to build up people and to raise people who know what it’s like to be in a healthy family and a healthy environment, then foster care is your game.”

Thank you for supporting the ministry of foster care! If you are interested in becoming a foster family, please email mchms@mchms.org.